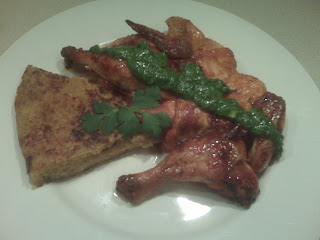 -I cut the back bone out of my Cornish Game Hens and rubbed/marinated them in equal parts adobo seasoning and brown sugar moistened with enough olive oil to make it like wet sand. That sat in the fridge, covered in a large glass bowl for about 6 hours.
Then it was browned in a large cast-iron skillet on both sides before I transferred it to a 350* oven, breast-side down. I weighed down the birds with a smaller skillet that I lined in foil before it went in the oven . It needed about 45mins until it was cooked through.
-My 5 black plantains were steamed, then mashed with a little brown sugar, salt, cinnamon, minced & sauteed onion and about a cup of shredded, sharp cheddar cheese. Then I melted some olive oil and a TB of butter in a 10in skillet before spreading the mashed plantain mixture evenly in the hot skillet. (Think hashbrown-potato cake) I let one side brown for about 2min on med heat, then carefully inverted it onto a plate before flipping the other side into the skillet to brown. (Please turn off your fire before doing this, I don’t wanna be blamed for burnt shirt sleeves)
-And then I topped the hens with a cilantro-parsley chimichurri (I just used half the parsley as usual and subbed cilantro)
It was very yummy…my 2 year old loved it all (in his defense, I told him he was eating a banana cake)
Sent on the Sprint® Now Network from my BlackBerry®

Abbey Wade is a lifestyle blogger from the Charlotte, North Carolina area. On her website, MyEverydayChampagne.com, she shares custom recipes, tips on food and wine pairing, fashion advice and makeup fun... all under an approachable budget and timeline. Stop waiting for a special occasion to feel like you're in one ;-)

Hi. I'm Abbey. Welcome to Everyday Champagne! This here is my space where I share all things from cooking tips, recipes and style inspo… to just what was on my mind that day. No matter what I’m writing about, I always believe that you should never wait for a holiday to cook the best food you can, put your best face forward, or feel your happiest… and that everyday is as special as the last. It’s about celebrating all the small things in order to make them the big things… and believing you deserve a little champagne everyday ;-). So cheers, y'all. Now let's have some fun.