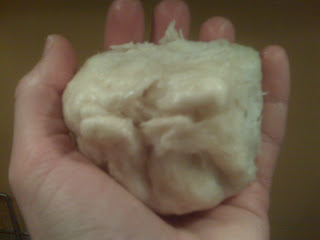 My mom and I took a trip to NYC several years ago and fell in love with China Town. The Dim Sum was to die for! So I recently set out to make Bao Buns at home…only to find that the dough is incredibly hard to make and manage. I’m a baker, and am pretty comfortable with dough in general but when several different web sites and books tell me that it’s difficult, I begin to wonder. And look for a short cut. And then my mom and I found one. Pillsbury Canned Biscuit Dough. It’s amazing. There are constantly coupons for everything Pillsbury in the paper and I always collect them because when they go on a big sale, I can get so many different kinds of tubes for free. I know it’s not necessarily ‘cheffy’ but this recipe was so incredibly delicious that I don’t feel guilty about it one little bit. And neither should you. So here’s what I did…
-In a food processor I put 1 lb. of peeled, cleaned shrimp along with… 2 green onions, (roughly chopped), 2 tsp fresh ginger, 2 tsp mirin, 2 tsp oyster or fish sauce, 2 tsp toasted sesame oil, 2 tsp soy sauce, a pinch of white pepper, 1 egg and 1 TB of cornstarch.
-I pulsed everything until it became paste-like.
-Then I joyously cracked open that blue tube and separated the biscuits, (I used 2 cans of the Jumbo Buttermilk Biscuits), then flattened each one until they were about 1/2 their original thickness.
-I put about a tablespoon’s worth of the shrimp mixture into the center of each flattened
biscuit and folded up the sides to create a beggars purse-like shape. (**Do not overfill the buns or get any of the filling on the outside of the dough because it will not close.)
-I then placed the buns in a steamer basket lined with parchment paper, with the water on a rolling, high boil and steamed with the lid on for 15 minutes until the buns firmed up.
(**If yours puff up and stick together in the steamer, (like mine did), don’t panic (like I did), they pull apart very easily.
-Allow to cool slightly and then transfer to an airtight container so they won’t dry out.
-Serve with a dipping sauce of… mostly soy sauce flavored with a splash of sesame oil, a good squeeze of honey, toasted sesame seeds and scallions.
Dim Sum good buns.
Sent on the Sprint® Now Network from my BlackBerry®

Abbey Wade is a lifestyle blogger from the Charlotte, North Carolina area. On her website, MyEverydayChampagne.com, she shares custom recipes, tips on food and wine pairing, fashion advice and makeup fun... all under an approachable budget and timeline. Stop waiting for a special occasion to feel like you're in one ;-)

Hi. I'm Abbey. Welcome to Everyday Champagne! EDC is a blog focused on Food & Wine, Style and Fun. My recipes and photos have been featured by The Huffington Post, Esquire Magazine, Yahoo Style, ABC's The Chew, Whole Foods, The Daily Meal, dōTerra, Feed Feed, LikeToCookIt, TasteSpotting, FoodGawker, Burger Weekly and Cabot Creamery. I believe that you should never wait for a holiday to cook the best food you can, put your best face forward, or feel your happiest, and that everyday is as special as the last. It's all about celebrating the small things... and believing you deserve a little champagne everyday ;-). So cheers, y'all. Now let's have some fun.